A tosheroon, “as any fule know, chiz chiz” is the gold piece that sometimes turns up in the sewer. Likewise, in the flood of verbal crap which constitutes the majority of my marking, there are, very occasionally, little gold coins. I offer you the following.

What originates as the character’s physical journey to her childhood home turns into a mental journey into her physique.

I had to ponder that for a bit, but I think he meant “psyche”.

I have also been entertaining myself with making my students play the lottery. That is, I give them a grading rubric, and ask them to use it to predict their grades. This is generally hilarious, mainly because of the ones who give themselves 99% when I end up giving them 49%.

This rubric is in the form of a sheet they are supposed to attach to their essays, but some morons cannot manage this. Such a one is the guy who emailed me, saying “I forgot the sheet, but I typed it out and here is my prediction of my grade.” He gave himself 99%, including 10 out of 10 for “grammer”.

I could not resist emailing him back to ask if he really meant to give himself 10 out of 10 for “grammer”. He replied “i think i did good on this essay, i tried real hard.”

Okay, so this semester I am teaching Children’s Literature, a class for which the reading is, to put it extremely mildly, “light”. FFS, one of the goddam books on the motherfucking reading list is Flotsam, which doesn’t even have any words.

Naturally, this poses some challenge to slackers because the reading can actually often be done in the 10 minutes per week they appear to allocate for it. This week, however, we were doing the kickass awesome novel by Kate DiCamillo, The Miraculous Journey of Edward Tulane, which, if you have a child and have not read it, you must immediately go and get, and even if you don’t have a kid, you should still read it. I wasn’t sure about this book, but my spawn and her teacher raved about it, so I read it, and they were not wrong. 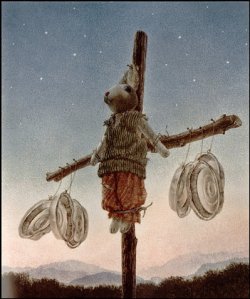 (Slight aside here to say that I have childhood trauma from the Velveteen Rabbit, and so any book that has even a teeny tiny Velveteen Rabbit vibe is a book I will not normally go near for any money, and the words “toy rabbit gets lost” really did make me hugely hesitant. However, this book is the book the Velveteen Rabbit should have been, so much so, that it may have eased my pain.)

Anyway, to return to my despicable slackers, none of these assholes had bothered to read the book, like even cracked it open, even though it would have taken the slowest of them no more than 3-4 hours to read. “Fine,” I said. “We were going to discuss it today, but I shall just make it the topic of the essay portion of the exam.” Take that, slack-jawed yokels.

I am not going to give them easy questions, either. The questions will contain words of many syllables, require examples from the text, or may simply be cryptic. For one of them, I am thinking of going with “Why a warthog?” Feel free to add suggestions of utter meanness in the comments.

So, that half of the class was a wash. The other thing I had planned was a peer review of their drafts of their final projects – which was writing a children’s story. I had said, several times, that they needed a draft of their words, so we could talk about age-appropriate vocab and similar. “Don’t worry about pictures, but you must have your text”. Yes, yes.

So how many of them had a draft? Oh, you know, half a dozen. The rest of them were desperately scribbling any old bullshit while I looked at the drafts by the people who had thrown 15 minutes at the task. But hey, guess what? It was worth actual MARKS. Quite aside from the fact that getting help with the draft might help with the finished product … OMG who am I kidding?

I gave a bunch of them zero, which felt quite awesome.

Mostly this blog is about my experiences, but I am making a departure and today to tell you this fantastic story of a plagiarizer one of my colleagues experienced, partly because it is awesome, but also because I had all my crazy at the beginning of the semester and not much is going on.

So, the Poetess, who teaches creative writing, previously mentioned for meanness involving the Starbucks recruiting ad, comes fuming up from a creative writing class, and naturally, I enquire as to the nature and origin of her fuming state, hoping for lulz.

“It’s this student. I am pretty sure he plagiarized his creative writing piece, but I am not sure if I can catch him,” she said.

The circumstances are these: in creative writing, students submit pieces of writing to be workshopped by the class. The Poetess circulates copies and then the writer reads his or her work, and then she and the class discuss it. Or so I gather. Anyway, there is definitely reading aloud involved.

Her suspicions were aroused when the student was having trouble reading “his” story. He was stumbling over words, and then when someone asked him which character was saying a particular line, he didn’t appear to know. The Poetess followed up with a question about the character’s motivation, which left the student similarly stumped.

So, she was pretty sure he didn’t write the story, but she wasn’t sure how to get proof. “Well, if all else fails, not knowing who is saying what in his ‘own’ story is pretty damning,” I said, “but have you tried google?”

“No one is that stupid,” she said, indicating what I admit is a distressing degree of naivete.

“It will take 60 seconds to try. Just pick a sentence with some unusual words in it.”

There it was, the whole story, with only one thing changed – the title. The Poetess was both impressed and horrified. “Who does that?” At least one person, it would appear. Later that day, she googled the previous assignment the student had handed in, and found that it, too, was just copied and pasted from the internets.

Now, there’s a rule that says two incidents of plagiarism is enough to get a student a suspension trial with the Cheater Board, but there’s a grey area about whether or not the incidents can be reported together. In other words, a cheater has to be convicted once, or at least meet with a prof about the problem before a second incident is counted as a separate offense.

On the other hand, who the FUCK cheats in creative writing – a subject where you can really write whatever you want? It’s not like fiction needs sources or facts like an essay, nor is creative writing a required course, unlike composition, where the hapless are inclined to try their luck with essays from the internet. This is usually a class filled with overblown egos of emo cutters who fancy themselves geniuses, not slackers with low self-esteem.

She sent off the report, requesting that the incidents of cheating be counted as 2 instances, given their egregious nature. I agreed that it was worth a shot, anyway. I also wanted to know if she was going to meet with the student (so that I could pruriently be within earshot), but she said she was only emailing him. “I think he is in a gang, so I would rather not see him in person,” she admitted.

Oh, great. Our other office-mate has a paranoid schizophrenic with violent tendencies in his class this semester, so that pinboard with the “read this if I turn up dead” notes is getting pretty crowded.

A few days passed before the student bothered to get in touch; he made an appointment with the Chair, no doubt to complain about unfairness, and then didn’t show. The Poetess was invited to attend the rescheduled meeting, and I was hanging out to hear the outcome.

“What did he SAY?” I asked, because, as you can imagine, the possible explanations for his behaviour had a pretty good chance of being outlandish.

Well, it turns out that mostly what he had to say was a string of excuses about how he had not been to class because he was sick, and intimidated by all the good writers in the class. None of which, as the Chair pointed out, explained the copypasta of the stories. No admission, no explanation, just a refusal to even address the issue. Very dull. The least cheaters can do is provide entertainment in the form of hilarious weaselling.

The sentence for his crimes is delicious, though. Instead of outright expulsion or suspension, the student is sentenced to several hours of plagiarism re-education camp, which must be completed before he can enroll in any more classes. The Poetess confessed herself reasonably satisfied with the outcome, although, “I would have been happier if he had been kicked out.”

“This is so much better, though,” I said. “Can you imagine how MAD this is going to make him?”

I thought I would have a bash at micro blogging for the little things that happen that don't warrant full-blown rantage.