So, you know I have a class full of dumbasses, but I also have a class of smartarses, which, oddly enough, is actually my remedial (in that it is a Grade 12 equivalent course) class. This class is like an academic lucky dip (a misnomer, surely, because all my childhood memories of winning handkerchief and pipecleaner dollies would suggest it was more of an unlucky dip); sometimes you get assholes; sometimes you get amoebas; sometimes you get a 2 or 3 dedicated students who had raw deal in high school but who are appreciative of the opportunity; sometimes, in a golden semester, you get 6 or 7 of those, and some of them have a sense of humour.

That’s what I got this time.

However, mixed in with the smartarses, who are doing their assignments and their reading and turning up to class cheerfully prepared to have a stab at expressing an opinion on Romeo and Juliet, I have also got Aggro Girl, who went off on a rant at me for being so unreasonable as to assume she would know what a subject and a verb are, Lazy Dude, who dared to ask “Did I miss anything?” even after we read and discussed Tom Wayman’s awesome poem in class, and Mikey.

Mikey turns up to class, but he doesn’t pay attention. Now, perhaps this is because he is physically incapable of taking in information. He may be ROMulan (ie his memory is all read-only), which would be sad, but it doesn’t make my classroom a good place for him.

The problem with Mikey is that he sees his problem with taking in information as my problem, or possibly a more global problem (naturally, it isn’t his problem), and so he is constantly asking for explanations of things that have been explained already, sometimes more than twice. I know, you are thinking, “why doesn’t she write stuff on handouts”? but the thing is, I do.

Mikey’s information retention problem extends to written information in the form of handout sheets, none of which he can retain either. I have given him at least 2 copies of every assignment sheet I have handed out to the class, and he still comes to me after every class, claiming to have lost, or often, not to have received, handouts.

The reason Mikey is annoying, as opposed to merely the object of pity and quiet derision, is his determination to spread his problem around. His conversation with me on Tuesday is a prime example. He came up to me after class (a class with a librarian, which I had scheduled specifically n order for students to get help with their research assignments, by the way), and asked for yet another copy of the assignment sheet. “I don’t think you actually handed them out to the class,” he claimed, despite the fact that everyone else obviously had the sheets because they were, you know, working from the sheets with the librarian. Then he went on to chastise me about the assessment for the course. “No one knows what the assignments are. I really think you should go through them in class so everyone can be clear what they are.”

I have to admit, gentle reader, that this really pissed me off, and so, I plotted my revenge, which occurred thusly:

Me [coming in to class, and being all cheerful and shit]: So, Mikey says no one in this class knows what the assignments are or when they are due, and that I should go over them all with you.
Class [groans]: No wai! We have all handouts and shit for this! We are totally clear!
Me: Now, don’t be shy; Mikey was brave enough to come to me with this problem, so I will respect your issues here, and I can spend a half hour at least going through this stuff with you.
Class: Can’t we please watch the second half of Shakespeare in Love?
Me: Assessment is important, and I don’t want any of you to be confused.
Class [more groaning].
Aggro Girl: Shouldn’t you wait until Mikey is here before you do that?
Class Clown 1 [throws something at her, behind her back].
Me: No, because that would entirely miss the point of pointing and laughing at him.
[at which point Mikey came in, because clearly karma approves of pointing and laughing at idiots]
Me: So, Mikey, we were just going over the assignments.
Mikey [oblivious to the raucous heckling he is getting from the back row]: Oh, good.
[Here follows several minutes of actual going through of assignments and what’s coming up in class and stuff, punctuated by numerous comments of “This is totally in the Course Outline!” and “We know! You told us already!”]
Me: Okay, just about done, but I need to remind you that we are starting to read short stories next week, so you have to buy your Course Pack, and read the story for next Thursday. [Holds up copy of said Course Pack, which is a horrible day-glow orange; this is a deliberate strategy on my part because I pick the cover to be something hard to misplace.] This is what it looks like, since there was some confusion about it not being in the Bookstore earlier.
Aggro Girl: Mine is blue.
Me: Does it have my name on the cover, and our section number?
Aggro Girl [with the tone of “when will this fucking bitch stop requiring me to know ridiculously esoteric crap?”]: How would I know?
Me: Well, you probably bought the wrong one, but if you go and ask them nicely [thinking: and explain that you are really, really stupid], they might exchange it.
Aggro Girl [absolutely enormous flouncy teenage sigh].
Me: Make sure you get the orange one, with my name on the cover, and read the first story for next Thursday.
Mikey: When do we need to have it by?
Class Clown 2: Dude! You totally didn’t just ask that! Tell me you didn’t seriously ask that!
Me: So can we watch the movie now?
Class: Yes! Already!
Me: Wait, someone’s cell phone is ringing. Who owes us M&Ms?
Aggro Girl: Dammit.

In case you are feeling at all sorry for Mikey, I can advise that he came up to me after class and told me he had lost the essay sheet (again), but that it was okay because he was going to make up his own topic. I can imagine that going well.

In the category “things I never told you about before” (this is a gesture at the fact that SJ tagged me with that meme and I ignored it), I knit. I made this: 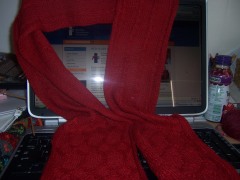 for the Red Scarf Project. Feckless said “but you don’t do stuff like that.” Apparently I do, on occasion. I like to think that somewhere there is someone who is grateful for the opportunity to go to college – just as an antidote to the aggro and the lazy and the dumbassy.

(Oh, and don’t worry, this is not going to turn into one of those scary knitting blogs where I show you horrific pictures of my ugly projects. I have no idea what it is about knitters that makes them do this; if you don’t believe me, just poke around blogspot with a knitting needle. Okay, now I realise I need to write a whole post dedicated to mocking them.)

2 thoughts on “Pointing and laughing at idiots, and other hobbies.”

I thought I would have a bash at micro blogging for the little things that happen that don't warrant full-blown rantage.